WACO — When Clayton Brookins, a former All-American at TCU, took over as head coach of Duncanville’s track and field program last year, he wanted it to run like a college team, not a high school one.

What does that mean? Among other things, Brookins said, it means preparation for the season begins in the fall, not January.

On Saturday, at the 6A Region II championship in Waco, he saw the early work pay off.

Duncanville scored 48 total points in the three relays alone, as it took first in the 4×100 meter relay, second in the 4×200 and third in the 4×400. Its 4×100 team — comprised of junior Jaylen Washington, senior Pierre Goree, senior Donte Hamilton and senior Chris Hicks — set a new meet record (40.08 seconds) in just its first time running together as a quartet.

The 4×200 quartet, which included the same four sprinters, also ran its first relay together. It ran a time of 1:25.75, just .21 seconds behind first-place Klein Forest (1:24.54). Senior Calen Jones set a personal record by three inches in the high jump, and took first with a leap of 6-9, tied for seventh-best in the state.

“We’re going to talk about this 2022 team for years to come,” Brookins said. “[Depth] is the best thing ever. I do believe I have the most talented team in the United States as far as the sprints and the relays go.”

Duncanville’s 4×100 team had hoped to break the 30-second barrier. Its mark Saturday is the seventh-fastest ran in the United States this season, though the group will aim for an even better time at the UIL state meet in two weeks.

“We’re very motivated,” Washington said. “Last year, we didn’t do what we had to do. That sat with us real long.”

Likewise, Goree — a SMU football signee — will run for higher heights in Austin. He won the 100 meter dash with a time of 10.23 on Saturday, though he didn’t eclipse his season best mark of 10.09 — currently the nation’s fastest time in the event.

But because a wind gauge wasn’t used when Goree ran that time, it won’t qualify as the Texas state record. Houston Strake’s Matthew Boling’s record of 10.11, set in 2019, still stands. For Goree to have a shot at breaking Boling’s record, a wind gauge reading of 2.0 or less will be needed.

“I’ve known Pierre since he was 9 or 10 years old,” Brookins said. “It’s wonderful to have that guy.”

A win would almost certainly guarantee a team title. Anything less might leave Duncanville on the outside looking in.

So, with a potential title on the line, the quartet of freshman Ashley Lister, sophomore Aaliyah Gipson, junior Kayli Hill and junior Indyia Walton won the meet’s final event with a time of 3:47.81. It proved to be critical as Duncanville clinched the 6A Region II team title by one point over Klein Forest, 69 to 68.

“It’s a small bunch,” Green said. “But they do pack a powerful punch.”

Winning is sweet. Doing it alongside the boys team is even sweeter.

“A great representation of what Duncanville track and field has to offer and what it’s about,” Green said. “The words escape me for that, because we have so much going on over there.”

DeSoto’s freshman star wins 800: Taryn Bailey has been running since she was 5-year-old. The 800 meter run — given its right combination of sprint speed and endurance — always served her well.

But Bailey, a freshman at DeSoto, wasn’t sure how her first year of high school track would fare.

“I was thinking, ‘Oh I’m a freshman, I’m going to be going against old people,’” Bailey said. “I was really nervous. But, now I’m out here.”

She certainly is out here. Bailey won the girls 800 meter run with a personal record time of 2:14.53. Her previous best (2:14.97, set at the Waxahachie Big Green Relays in March) was already a top-20 time in the state and second among freshman, per MileSplit.

“Do what I keep on doing, finish strong,” Bailey said of the state meet. “Just get through the rest of the season.”

With redemption on the mind, Skyline’s Brown wins twice: Roylatee Brown cried as she sat in the stands at last year’s UIL state meet.

Then a freshman, the Skyline sprinter missed the state meet and the 6A-II regional meet with a hip flexor injury. Any chance she had to contend for a state title was wiped away. Her best 200 meter dash time last year — 24.06 — would have placed her fifth at last year’s regional meet.

So, this year, fully healthy, she had to redeem herself.

Brown won the girls 200 meter dash with a time of 23.72, and ran in Skyline’s first-place 4×200 meter relay team, which set a season-best time of 1:38.28. Willexis Beaver, Makayla Jones and Ke’Liyah Anderson also ran in the relay. Skyline finished fourth as a team with 43 points.

“Hopefully I’ll bring home a state championship to my school, my momma, and everyone supporting me,” Brown said.

Brown said the relay win was entirely out of her mind by the time she ran the 200 meter dash, which was about an hour afterwards. She did, however, feel a bit weak. She even threw up before the race. Brown edged out Duncanville sophomore Aaliyah Gipson (second place, 23.80) by 0.07 seconds.

“I knew if I wanted to make it, I had to fight,” Brown said. “Dog mentality. Winning mentality. I’ve got to make my momma proud, she didn’t come out here for nothing.”

Rockwall hurdler repeats as champ: There’s a difference, mentally, between hoping to win and expecting to win.

Rockwall senior Samuel Alves knows what that’s like. As a junior last season, he won the boys 6A-II 110 meter hurdles title with a time of 14.05. He went on to finish third at the UIL state meet two weeks later.

So this time around at the 6A-II meet, as the defending champion, things were a bit different.

“Last year it was just about coming in and doing your best to see how well you can do,” Alves said. “This year it was about pride and getting back to state. There’s a lot of pressure that comes with it, you’ve kind of got that expectation to win these meets. To come here and do it, it feels great.”

Alves successfully defended his title with a time of 13.86. He’ll look to break his personal record (13.75, set at last year’s state meet) in Austin in May.

“If I can get anywhere under that, I’ll be more than happy,” he said.

Notable: Waxahachie’s Josh Harris jumped a personal-best 47-10 to win the 6A boys triple jump championship. The senior’s previous top mark was 47-02.5 … The Dallas-area swept the boys 400 meter dash: Wylie’s Logan Popelka (46.99), Mansfield Lake Ridge’s Dominic Byles (47.28) and DeSoto’s Jamari Harts (47.47) took first, second and third … DeSoto’s Chrystal McDaniel won the girls 100 meter dash with a time of 11.72: “I knew that I was running with some of the fastest girls, and my goal was to win my race.” … Rockwall’s Claire Lowery won the girls high jump with a mark of 5-10. Her season-best mark of 6-0 is second-best in the nation … Wylie’s Nathanael Berhane won the boys 3200 meter run with a personal-best time of 9:07.35 on Friday. 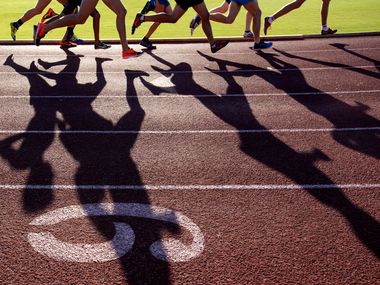