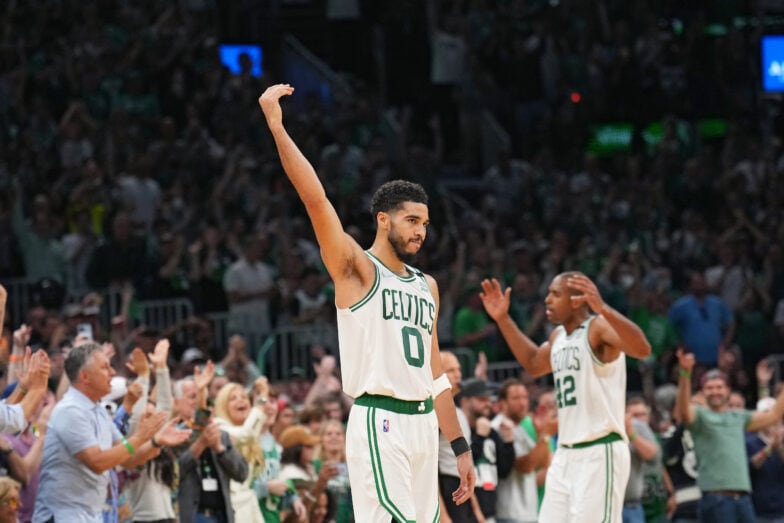 Jayson Tatum racks up 23 points, 6 rebounds and 8 assists to guide the Celtics into the Eastern Conference finals.

BOSTON — The fall of a defending champion, the rejuvenation of a franchise with 16 championships, it all made for a thrilling Eastern Conference semifinal. And so: Here are five takeaways from the Celtics’ 109-81 Game 7 victory and this entire exhausting, thrilling series:

1. Even Giannis can run out of gas

He is 6-foot-11 worth of energy, a player without brakes, a superstar who doesn’t take possessions off. But ultimately, the task of hauling the Bucks for two weeks and two time zones proved too taxing for Giannis, especially against a terrific defensive team.

Yes, maybe against almost anyone else, Giannis would’ve closed out in style and pushed the Bucks to see another day. But Boston offered too many layers of walls — Marcus Smart, Al Horford, Grant Williams. And you could tell by the handful of bunny shots he missed in Game 7 that Antetokounmpo was whipped. When your franchise guy struggles (10-26 FGs), it tends to sap all of the energy from the rest; the Bucks scored just 81 points overall.

To put it simply, Giannis didn’t hurt Boston in the winner-take-all. He had a few moments, but never mustered a string of them and never made Boston nervous, unlike the rest of this series. And that’s awfully weird to say about a player who went 25-20-9 in a Game 7.

What needs to change for the Bucks to get back to the summit?

The last time Giannis faced an elimination game, he dropped a 50-piece on the Suns and sipped champagne. He wasn’t weary in that sixth game, wasn’t to be denied. It helped that he fed off that home court energy, but that made for a historic Finals moment.

Giannis did what he could against the Celtics, and it was a lot, with three games of 40 points and 10 rebounds. Asking him to be superhuman, and against this Boston D, was a bit much.

2. In the finale, the Celtics didn’t need Tatum to be great

The best news for Boston in this decisive game is Jayson Tatum didn’t need to out-duel Giannis. That says plenty about Tatum’s help vs. Giannis’ help, because overall, the Celtics are the deeper team and it showed in the moment of truth.

Don’t get it twisted: Tatum had to be great for Boston to get to this point, and Tatum had emphatic stretches Sunday, but he wasn’t the team’s leading scorer and he was reckless at times (seven turnovers). No matter, the Celtics had others to pick up the slack whereas the Bucks couldn’t supply the same support for Giannis.

Grant Williams was a refreshing asset in Game 7, much like he was in Game 2. This was impressive in that he was coming off a chilly pair of games where he scored a combined two points and came up short defensively against Giannis (no shame there). On this day, Milwaukee left Williams open and Milwaukee paid for that. Williams took 18 shots from deep (“We’ll call him Grant Curry,” joked Jaylen Brown) and made seven of them — hitting 6 of his first 14. Many of those shots fueled momentum for Boston and kept runs alive.

“[Grant] took the most shots of anyone on the team and I think that was a first for him, and we needed that,” Tatum said. “Every shot he took was a great shot. He took 22 shots and could’ve easily took 30. Grant won us a playoff game.”

At the other wing, Brown would be the leading scorer on 10 other teams (if not more), but next to Tatum, he must be a willing shotgun rider most nights. To Brown’s credit, he keeps the mentality of a leading scorer, and that came in handy for a Game 7, with 19 points on a cool 50% shooting, stepping forward when Tatum needed a boost.

And finally, Payton Pritchard came off the bench and shot 4-for-6 from deep. The Celtics for much of this series found that bench player who, in some manner, contributed to the cause, be it Pritchard, Derrick White or, before he was injured, Robert Williams III (who suited up Sunday, but didn’t play for the fourth straight game). The Celtics were also solid when Tatum earned his fourth foul; Boston actually increased the lead with him on the bench.

“Extreme team effort,” he said. “The way they played together, moved the ball, I was happy watching form the bench.”

3. The loss of Middleton proved deadly to Milwaukee’s repeat

Well, yeah, you think? Khris Middleton missed the entire series and the longer it went, the more Milwaukee’s chances of advancing dimmed. That’s because you can’t keep asking a lot from the role players who tried, and mainly failed, to replace what Middleton gave them.

“We could’ve used him,” said Bucks guard Jrue Holiday. “He was missed.”

Middleton, who had a hyperextended knee and hadn’t suited up since April 20, is more than just a No. 2 scorer who averaged 20.1 points this season. There are times when he’s the primary scorer for the Bucks, particularly in the fourth quarter when they need a hot hand from the outside. And his presence, even when the shots aren’t falling, makes it easier for Giannis because the defense cannot relax; he’s one of the most underrated players in the league in that regard.

“You got to have good players, you got to be a little bit lucky and you gotta to be healthy,” said Bucks coach Mike Budenholzer. “I’ve always said you need all three to win a title. We weren’t as healthy as we’d like to have been but nobody cares … nobody feels sorry for us.”

The results without Middleton were predictable. There was no consistency from anyone else — and truthfully, lots of eggs laid by Grayson Allen. The lights were too bright for him. He missed 12 of his 13 shots the last two games, both losses, and was leaky on defense as well. The Celtics actively sought him out at both ends of the floor, daring him to shoot while isolating him on defense. It was tough to watch.

But it wasn’t just Allen. Pat Connaughton, so steady in a support role during the Finals, missed five of six shots Sunday. Wesley Matthews had one basket. The players responsible for outside shooting didn’t come through; Milwaukee was 4-for-33 from deep Sunday and you can’t win with that.

The Bucks had the third-best offense in the NBA this season, and only twice were held under 90 points. Both happened in this series — without Middleton.

4. Al Horford, up from the ashes

The re-re-re-emergence of Horford is the most unlikely story of the NBA playoffs and also the most refreshing. Keep in mind that last season, he was on the bench for a tanking OKC team, and two years ago was part of a dreadful experiment in Philadelphia next to Joel Embiid.

Horford was not in demand on the trade market last summer, not only because he seemed finished, but carried a bloated salary and was about to turn 35. Yet Brad Stevens, in one of his first moves as the freshly-minted GM, wanted Horford back in Boston, where Horford previously enjoyed a solid stint before bolting to Philadelphia. Celtics coach Ime Udoka had served as an assistant coach with the 76ers during Horford’s one season there and vouched for him, saying Horford wasn’t used properly.

Celtics veteran Al Horford scores a career playoff-high 30 points — including 16 in the 4th quarter — to lift Boston in Game 4.

In any event, Horford became a changed player once re-painted green, and his value soared for Boston in this series. Asked to hit the open shot and more importantly, serve as the primary defender on Giannis, Horford came through time and again.

5. Jayson vs. Jimmy should be entertaining

The two players whose momentum is rolling toward a marquee matchup in these NBA playoffs will meet in the East finals: Celtics’ swingman Jayson Tatum and Heat All-Star Jimmy Butler.

Tatum brings a stellar semifinal run as evidence in his favor, because he was tested in just about every way, and aced all of it. Big shots? Check. Big games? Check. Big impact? Yes, all that against the Bucks.

He said, in all honesty: “I expected to play the way I did.”

Jayson Tatum’s maturity as a playmaker has begun to match his elite scoring talents.

His lone goal is reaching the NBA Finals, and he is one step away. This is the fourth conference final in six years for the Celtics. Tatum was here two years ago in the bubble, against Butler and the Heat, and came up short in six. In that series, it was Butler who took the star turn by elevating his offensive game, much like Tatum just did against the Bucks. Butler is averaging 28.7 points in these playoffs, along with 7.6 rebounds and 5.4 assists.

“It gets tougher,” Tatum said, “From the first round to the second, the second to the next round. I’ll go home, pack my bag and get ready for Miami. I think I’ve grown [from the bubble] in the sense of being more prepared.”

“[The Heat] are a tough team, full of dogs. I expect nothing less from them.”

And the Celtics expect nothing less from Tatum. Butler offers plenty defensively, and will also force Tatum to expend energy at the other rim, providing a major challenge to avoid fouls and while maintaining his crucial presence with the ball.

Tatum just turned 24, and seems restless about not having a shot at a title after four seasons. Here, he gets another try, and all the necessary elements are seemingly in place: solid team, good co-star, home court advantage and an improved all-around game.

“Miami is another extremely physical team,” Tatum said. “We played them two years ago in conference finals and I’m looking forward to it, to get over this hump.”

Shaun Powell has covered the NBA for more than 25 years. You can e-mail him here, find his archive here and follow him on Twitter.

The views on this page do not necessarily reflect the views of the NBA, its clubs or Turner Broadcasting.