However, after embracing the process of the New You Plan, Alison dropped 6 stone. Now she is on the road to controlling her underactive thyroid and being medication free.

NY: How much have you lost with the New You Plan?

ALISON: Since starting the Plan I lost 4 stone in the first 12 weeks. In total, I’ve lost a little over 6 stone.

NY: How did you discover New You?

ALISON: My doctor recommended doing a low-calorie diet to kickstart weight loss after I was diagnosed with an underactive thyroid. I had put on a lot of weight when I had my daughter almost five years ago, and then I couldn’t lose it as I was on bed rest for various problems. My doctor recommended I lose weight alongside taking medication to get my thyroid under control. Around the same time, the two weeks starter bundle popped up on my Facebook feed and I just hit the buy now button on impulse!

NY: Facebook is weird like that – it always knows just what you need! It’s great that your doctor recommended a low-calorie diet too! Tell us, how did you feel before you started the Plan?

ALISON: I had lost literally all my confidence and self-esteem because I’d never been overweight before. Before I was pregnant this last time I was a fitness instructor and so I was quite fit. Going from that to being quite obese really had a massive knock-on effect. For example, I wouldn’t wear my swimming costume to teach swimming. I would have to wear shorts and stuff like that. I was really down on myself and because of having an underactive thyroid, I thought, oh well that’s it,  there’s nothing I can do about my weight now. That’s just me forever now and I literally thought nothing could change that.

I’m doing the London Marathon again this year, and I’ve run 4 half marathons this year as well. I wouldn’t have been able to do that with the weight on. And I’m doing a triathlon next year too! I’ve gained my life back. I was very fit before the weight but now I’m doing more than I did back then. I’ve never done a triathlon before! 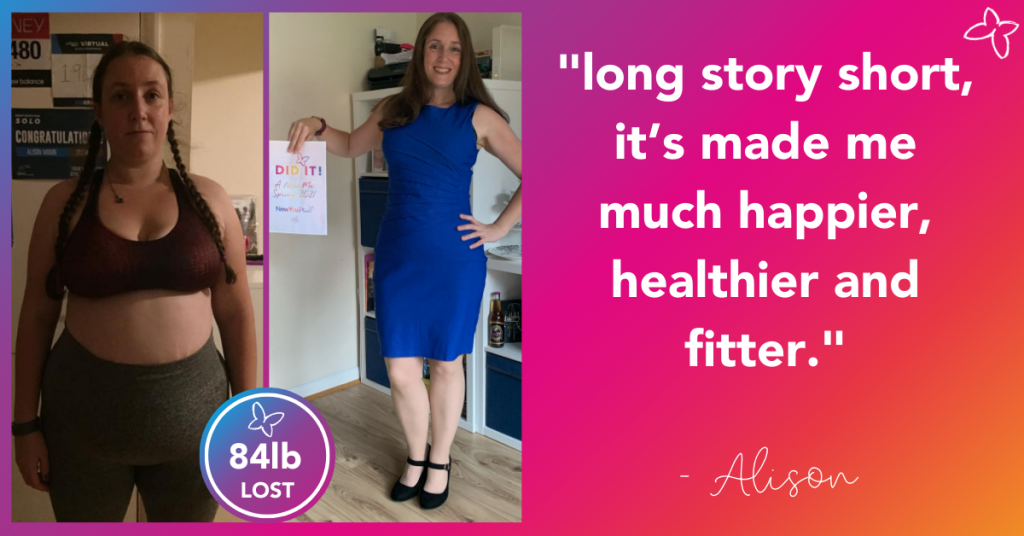 NY: What was your first impression of the New You Plan?

ALISON: I was a bit apprehensive, however, if I say I’m going to do something I really commit to it. So the first week really wasn’t easy but I looked at all the information I was given on what I could have and planned it out for the week. At that point, I didn’t realise that you could have snacks and make jelly with the water flavourings or have bullion – which is a lifesaver by the way!

NY: How was your first week and how much did you lose?

ALISON: The first week was difficult but I stuck to it religiously and lost 9lbs. I also learned a lot from the Secret Slimmers in my first week. Once I saw my results, I immediately placed another order which included snacks like the wafers, the water flavourings and pineapple boost.

NY: Do you have any favourite meals or snacks and do you have a daily routine now?

ALISON: I like everything actually! The first meal I made was the spicy noodle nosh and I did not like it at all! It wasn’t until I got some tips from the Secret Slimmers and tried to make it a different way, and, well, now it’s my favourite. The Secret Slimmers are great for stuff like that. I have to say that I love the apple and cinnamon biscuits.

For breakfast, I have the apple and cinnamon porridge, at lunch, I have the omelette as it’s really versatile. You can have it as scrambled eggs or bake it in the oven. Usually have the vegetable risotto at dinner time, and in the evening I have a cafe latte shake and a nutty fudge bar. I tend to stick to regular meal times, so breakfast, lunch and dinner then something in the evening. 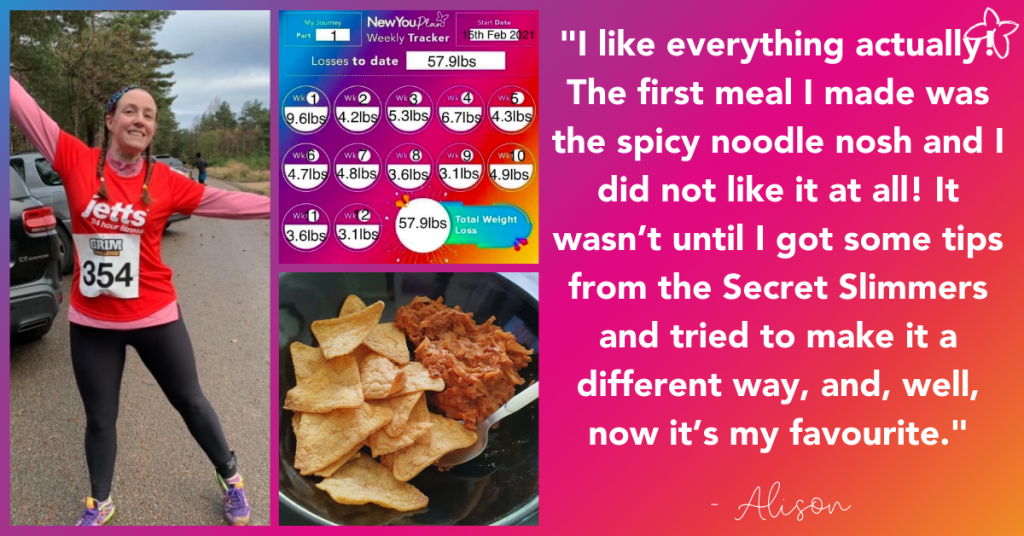 NY: What would you say was your biggest non-scale victory?

ALISON: It’s funny because I’m quite proud of it but it was annoying at the time, I got I.D’d when I tried to buy alcohol for my brother’s birthday celebration. When they saw my driving license they said it wasn’t me in the photo! It’s happened several times. I’ve had to change the photo now!

More Than The Scales

NY: What was your biggest motivator for staying on Plan?

ALISON: I think my children, I would say my kids seeing the weight go down and being able to do more with them like being active. Also being happier and healthier and fitter.

NY: So how would you say the plan has changed your life?

NY: How has your health improved since losing weight?

ALSION: I’m a happy size 8 now! I’m fitter and I’m now on the lowest dose of thyroxin that’s required. Hopefull
y, I will come off it completely in my next review. That is a lifesaver, having turned my health around without needing medication.

NY: Since losing weight, what has been your happiest memory?

ALISON: Being able to wear a swimming costume without my kids or myself feeling embarrassed. Also being able to run the London Marathon, because everyone cheered me on, everyone was behind me and it was emotional. 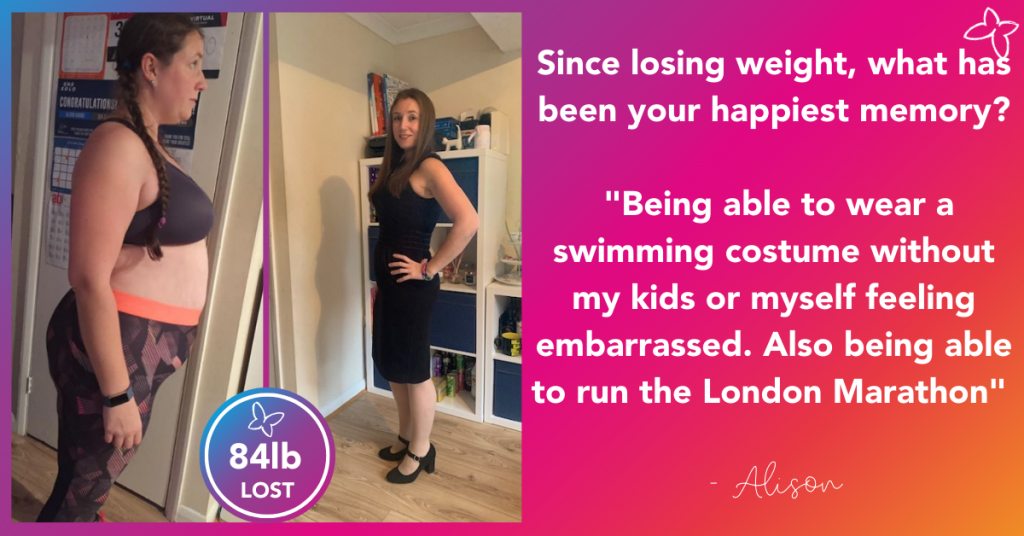 NY: What would your say is the nicest compliment that you’ve received?

ALISON: I get all the usual things, but what really is a compliment is when people say I’m an inspiration, as I don’t see myself that way! However, some people have said to me when I share before and after photos that I am inspiring. Even though I don’t think I am, it’s nice that other people do.

NY: What advice would you offer to anyone who is thinking of starting the New You Plan?

Use the mindset sessions, and all the tools that are available that the plan gives to you. That applies to maintaining on Switch, there is so much information on there as well. People say that when you do these diets, once you stop you put the weight back on, but with New You that’s not the case. You are not just left, you’re given the tools to adapt with Switch. I’ve been maintaining since September 2021 and the only reason why I’m back on TFR is because of my surgery and needing bed rest. Normally I’d be on Switch.

Even though she doesn’t believe it herself, Alison is a true inspiration. She has taken all the tools New You gave her and as she mentioned, trusted the process.

6 stone is a fantastic result, and Alison has proved that having underactive thyroid issues doesn’t need to be a barrier to anyone becoming healthier, happier and fitter.

If you’re thinking of giving the New You Plan a go and have any questions before you order your first bundle, then get in touch with our friendly customer service team who are always happy to take your call.